Jute. Hemp. Burlap. Homely, homespun, humble—hardly the stuff of which dreams are made unless your name is Kathryn Hart.  Yet such are the roughhewn type of raw materials that, more often than not, form the underlying layers of many of Hart’s very sophisticated artwork.  Homespun, it is not.  Sculptural, it is.

The late George Canatta, an abstract expressionist painter and former teacher at the Art Students League, once said, “In the hands of an artist, childhood is never very far away.”  That is certainly true of Hart, whose equestrian background included those materials as stable and familiar components in her art.

“I use rough, raw, earthy materials,” Hart explains, “because it suits what I am searching for in the series—art unadulterated about myself...Burlap is hardy and withstands twisting, pulling, tearing apart.  I can form beings, breathing entities that are solid, yet full of air.... There is a tension created from this dichotomy....Also, I love the smell of them. They smell of the earth.”  There are still other found materials; barbed wire, rusted hinges, hardware, and bones. Everything, it seems, could be grist for her mill.

Matter matters in these hautâ€‘relief mindscapes, of which many are monochromatic. Their 3-D dimensions plumb the depths of a captured inner darkness, sometimes liberated by flashes of primed unpainted canvas; others totally ivory, bursting with light, promise and hope, such as “Traction,” a triptyque whose hinged panels—paintings in and of themselves— open to reveal a blinding landscape—ruffled, ripped and rumpled, stained and streaked with a trail of blood red.  Hart has the unique ability of being able to combine extreme strength and extreme fragility within the same frame.

"Pregnant, empty space—ripe with expectations, hope and longing—often plays a key role. These open frames (as in “Empty Fable,” “Veiled Attempt,” “Dialogue with a Madwoman,” and others) allude to the emotions around leaving (or being left) and staying. Exits and entrances.  Emotions are different depending on which side of the open door you are.” 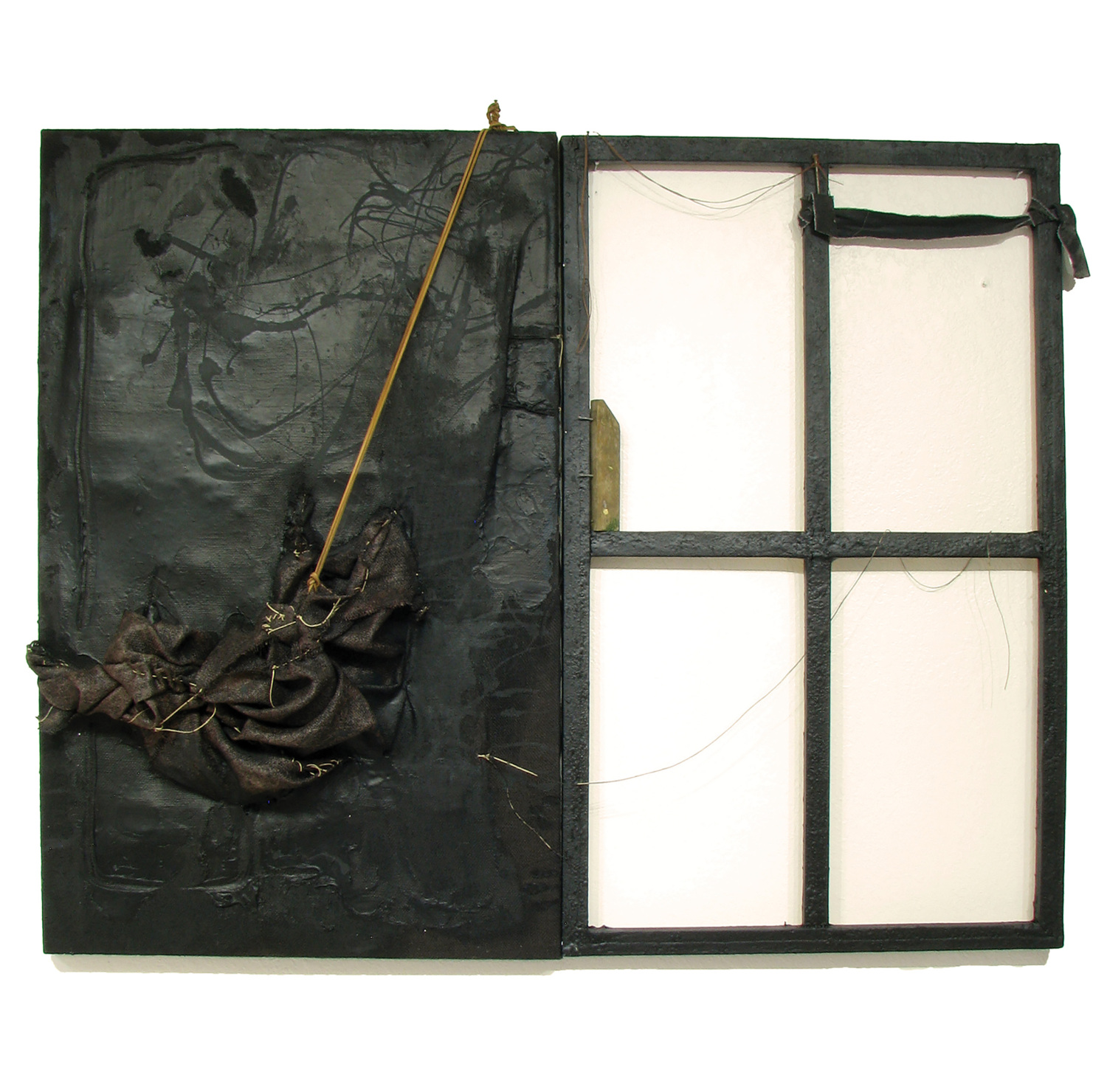 The muscular physicality in her mixed media imagery encompasses both her paintings and her assemblages.  The sculptural quality of her surfaces somehow manages to both conceal and reveal simultaneously.  Hart’s work seemingly erupts from beneath, rippling rents and wrinkles, bulging and burgeoning forms, some broken, some breaking out, from an undercurrent half hidden, but ominously present.  Others weave the proverbial tangled web of crazily strung wire incarcerating non-figurative shapes.

Fissures and tenuous, tentative threads, strings, slim cords are cast with abandon across a plane suggesting the inherent frailty of our mortal coil.  Still others sport holes and geometries that incorporate their immediate environment, thereby becoming part of the work itself. Such are the windows into Hart’s world, and within it, she molds mysteries.

Her work is autobiographical. As she explains it: “Each of my series is relevant and pertinent to my life at the time of creation.  My life informs my art, so each piece is a real time reflection of my life, current struggles and emotional states....”

Hart works in series; her latest, “Unapologetic Presence,” reflects her current life phase.  In these images, she seeks to present “the search for an unswayable feminine identity amidst the white noise of society, family and personal experience.  I am (finally) unapologetic about who I am.  My search requires blocking out the external voices in my head to dig into my true identity.”

Kathryn Hart, at first glance, would seem to be an unlikely candidate as an artist.  The daughter of a plastic surgeon, she spent 15 years in the corporate world.  Artistically inclined as a child in a decidedly scientifically driven family, all of whom were in the medical field in one way or another, her initial creativity was stifled.  Art school was not an option—not even a remote one.

She became a market researcher for major medical companies. “My job was to uncover the unseen need, find the niche not-yet­discovered, and focus on the gap, not what actually existed.”  That mindset seems to have permeated her artistic endeavors-- a theory she embraces. “The thinking, the search for hidden/ subconscious desires, focusing on space, not object-- that is similar.” Right-brain thinking, she says, does constitute a “thread of continuity” with her art—the focus being on the idea.  After a few years, the world of big business paled before the prospect of mining her “real” self—as an artist. The idea of climbing still another rung on the corporate ladder left her feeling hollow.

“I had to create,” she says, “because the need sprung from an internal well.  I could say so much more in a piece of artwork than on a piece of paper...I think art is an experience.  It is not necessary to understand it.”

Tejo Cole wrote in his column “On Photography” (The New York Times Sunday Magazine, Feb. 22, 2015) something that seems remarkably appropriate to describe many of Hart’s works: “What is dark is not empty: if you know how to see, there are glories in the shadows.” That is not to say that there are not glories in Hart’s light.

Hart explores her inner darkness and her inner light. In so doing she lays bare our own psyches. “The focus on primal emotions makes my work universal—accessible to everyone because its genesis is an emotional response.” These “physical embodiments” of complex emotions compose the cloth that Hart weaves on her artistic loom. The “living, breathing” bodies of emotions compose the “strong sculptural component” in her work.

“I reveal the underbelly of life, the aspects of ourselves we want hidden...” That said, Hart readily admits to “the strength in revealing our human fragility, not veiling it.” Hart’s humanoid forms, some of which look as though they had crash-landed on the surface, are “sutured and stitched, sometimes suspended in their own amniotic fluid of sewn threads and wires.”

Color is symbolic, if severely restricted.  Her palette is essentially a quartet representing the fabric of life, living and mourning: ebony black, earthen brown, ivory white and blood red. “More color would be a distraction, a decoration... Color would trump the texture and flatten the sculptural aspects of the piece.” Less is more.

Hart resonates with artists who have physicality, power and poetry.  Not surprising.  Her own work has all three.  Among her favorites: Brancusi, Calder, Noguchi, Bourgeois, Miro, Joan Mitchell, de Kooning, Rauschenberg, Jasper Johns, Louise Nevelson, Rothko, to name but a few.

“I need to create like I need to breathe,” she says. “At best, I’d like for viewers to walk away with an intimate glimpse into themselves.”  Preferably unapologetically.